Beyond the threshold @ S Artspace NYC 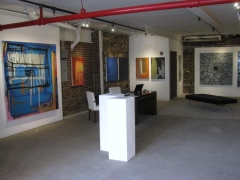 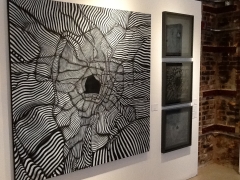 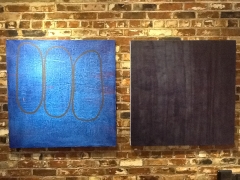 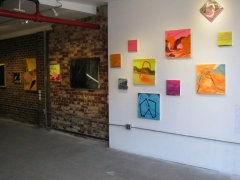 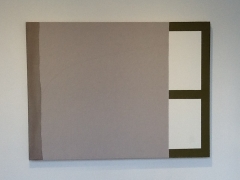 DIALOGUES WITHIN THE SPACE OF PAINTING

Works of Erika Diehl are there to be unraveled, there to engage in a dialogue with the spectator that will have to make the effort to pay close attention in order to reap the benefits of the experience. These attractive and complex pieces can be seen as parts of a whole that evoke the spectator to try to reconstruct their level of meaning. Diehl invites one into her space of dialogue, into her mind-space where she seems to be thinking through paint shaping the indefinable boundaries of the imagination.

In the works of Justin Hoekstra we are prompted to give in to total abandon and suppress logic and enter into this abstract space of cognitive meaning where life manifests itself in full color and gesture. The endless mutation of visual information once it has been internalized by the artist is outright staggering to consider, and the decision to work abstractly is in service of the development of a visual language that might be simultaneously universal and specific. He is drawn into the work by the open ended question that painting presents against which he stacks answers that only serve to open the question again. explorations of Andrew Lubas have led him to abandon and expand upon the support system of the painting in order to explore new transitive spaces where the passage and awareness of space become essential. His works are based on explorations beyond the notion of order and control and how the context of the inside and outside the frame of the painting engages in dialogue with the space itself. The interplay between the two acknowledges the surrounding world and reconciles it with the work.

David Myers on the other hand uses the objective structure of the grid in order to define and convey meaning, here one is drawn in by the aesthetic allure of these cityscapes with their layered collective histories, complexities and meaning, while beyond the façade the deeper, subjective, personal interpretation, and translation of this confrontation with the other can be perceived. Here structure defines meaning and directs ones gaze to the greater questions within the work of art.